A conversation with Chris Molloy, PhD PHARM '77, GSNB '87, Chancellor of Rutgers University - New Brunswick with moderation by Ralph Gigliotti, PhD, Director of the Center for Organizational Leadership at Rutgers University

The Rutgers Business School Signature Leadership Series: Lessons of Resilience, Resourcefulness, Responsibility, and Reinvention features live virtual discussions with thought leaders and business leaders from across the industry spectrum. This complimentary biweekly series will give you:

Join the conversation and get a glimpse into their everyday, real-life challenges and learn from their leadership playbooks. 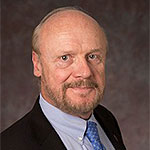 Christopher J. Molloy serves as the Chancellor for the Rutgers University flagship institution with responsibility for advancing the university’s mission of excellence in teaching, research, and service that benefits the public good in New Jersey, the nation, and the world. With almost 50,000 students and 11,000 faculty/staff, and an annual budget of almost $2 billion, Rutgers–New Brunswick is a national research powerhouse steeped in history, innovation, and diversity. Rutgers, with membership in the American Association of Universities and the Big Ten Conference, continues to generate new knowledge and new scholars as an institution whose faculty, students, staff, and alumni tackle issues that impact people’s lives in meaningful ways—from health care to climate change, from technology to nutrition, from the arts to engineering.

Molloy joined Rutgers in 2007 as dean of the Ernest Mario School of Pharmacy. In 2011, he was appointed interim provost for biomedical and health sciences and successfully managed the complex integration of Rutgers and most of the former University of Medicine and Dentistry of New Jersey (UMDNJ) in 2013. Molloy served as interim chancellor of Rutgers Biomedical and Health Sciences and then Senior Vice President for the Office of Research and Economic Development until his appointment as interim Chancellor in July 2018. In February 2019, Molloy was officially appointed Chancellor of Rutgers University – New Brunswick.

Molloy received his bachelor’s degree in pharmacy from Rutgers and his doctoral degree from the joint Rutgers Graduate School of Biomedical Sciences at Robert Wood Johnson Medical School/Graduate School–New Brunswick. He was a post-doctoral fellow at the National Cancer Institute.

Prior to joining Rutgers, Molloy held senior research and management positions at Johnson & Johnson, 3-Dimensional Pharmaceuticals Inc., and Bristol-Myers Squibb Pharmaceutical Research Institute. He is also a licensed pharmacist in New Jersey. At Rutgers, he holds a faculty position as Distinguished Professor of Pharmacology and Toxicology and is a member of the Rutgers Cancer Institute of New Jersey, the American Association for Cancer Research, and the American Society for Biochemistry and Molecular Biology, and the American Pharmacists Association. He was elected as a Fellow of the American Association for the Advancement of Science in 2016.