The Rutgers Business School Signature Leadership Series: Lessons of Resilience, Resourcefulness, Responsibility, and Reinvention features live virtual discussions with thought leaders and business leaders from across the industry spectrum. This complimentary monthly series will give you:

Join the conversation and get a glimpse into their everyday, real-life challenges and learn from their leadership playbooks. 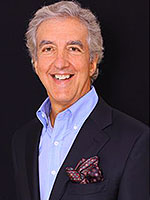 Michael Stone serves as Chairman and Co-founder of Beanstalk, a leading global brand licensing agency that is a part of Omnicom Group. He is also author of The Power of Licensing: Harnessing Brand Equity (Ankerwycke, 2018) and has been inducted into the 2019 Licensing International Hall of Fame.

Under Michael’s leadership, Beanstalk has been responsible for some of the all-time most successful licensing programs, including programs for Harley-Davidson, The Coca-Cola Company, Procter & Gamble, AT&T, Ford Motor Company, Stanley Black & Decker, the U.S. Army, and HGTV, among others.

Michael is a widely sought-after authority on licensing and is frequently cited in top print and broadcast media outlets. He is also a frequent contributor to Forbes. Michael has served as an adjunct Professor of Brand Licensing and has been a frequent guest lecturer on licensing at several institutions.

Michael earned a JD from Emory University School of Law and a BA in Government from Hamilton College.