Starting a Tech Business as a Non-tech Founder

If you’re a non-technical person who’s curious about what it takes to start a tech business, this is the right webinar for you to learn about taking a leap of faith and gaining traction in your start up.

Starting a business seems like a daunting task. But, it may feel even more daunting in wanting to start a tech business as a non-tech person. If you’re a non-technical person and curious about wanting to learn what it takes in the early stages, this is the right webinar for you. Our presenter, Steve Lee, is the founder and CEO of Groc, a mobile self-checkout app company, and he is a non-tech founder with zero technical background. Groc is still in a relatively early stage, so the challenges of the very beginning are still vivid for Steve. Learn what it took for a non-tech founder to take the leap of faith, quit his six-figure job at Amazon, and gain traction in his start up. 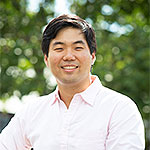 Steve Lee is the founder and CEO of Groc, a mobile self-checkout app company. Groc is a SaaS business that services retail companies to have a self-checkout with an app. After high school, Steve joined the US Army and became a medic paratrooper in the 82nd Airborne Division. After 4 years of active duty, he attended and graduated from Rutgers. During Steve’s senior year, Amazon reached out with “an offer he couldn’t refuse.” Steve pivoted his background from practicing medicine in the Army and studying biology in college to applying his leadership skills as a warehouse manager. Eventually, Steve was diagonally promoted to a program management role in the regional logistics chain. However, where Steve found his calling for entrepreneurship was when he couldn’t find a solution to his own problem – so he took a leap of faith.