Finance and economics professor Farrokh Langdana analyzes the reasons for the rise in inflation and what to expect next year for the U.S. economy

This blog was inspired by responding to questions from alumni and students in the Rutgers MBA program about the current economic situation as we enter the new year. Even though the blog is U.S.-centric, much of the material applies strongly to most of the planet.

Professor Langdana, the resurgent inflation in the U.S. has not come as a surprise to you, right?

Correct, it has not. I conducted a huge Rutgers Business School (RBS) online alumni seminar in April 2021 where we discussed how global long term interest rates were ALL heading up in unison, thereby heralding upcoming inflation. Many months ago, we knew that inflation was heading our way, thanks to the Fisher Effect, which signaled higher expected inflation through these rising rates (Fisher Effect: long term nominal interest rates = real interest rates + expected future inflation).

So, what is driving this resurgence? Inflation has not been a problem in the U.S. since the days of Fed Chairman, Paul Volcker, from 1981... so why and how is inflation back? Apparently, this is the most inflation in over 40 years in the U.S.!

There are many reasons. Let’s list them off very briefly. The first obvious reason is the supply-chain-driven inflation, traditionally known as “Cost-Push” inflation. Here the economy’s aggregate supply curve is pushed to the left (shown below) as global supply shortages develop due to the post-covid supply-chain mess. Add-in the coal shortage in China and you now have an oil shock affecting this leftward shift too. Keep in mind that we are still in the Covid era. Our ports are all snarled up, there is an ongoing shortage of truck drivers, safe distancing is back in factories, there is a semiconductor chip shortage and an overall shortage of workers. All this combines to shrink global aggregate supply. This is the cost-push inflation shown below. (P is Inflation and Y is output growth.) 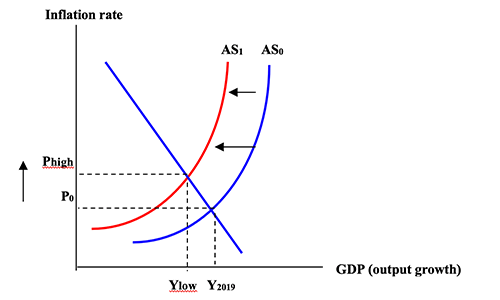 But aren’t episodes of cost-push or, “commodity” inflation usually temporary?

Yes. Textbook supply-side shocks such as oil shocks, or the effects of floods, droughts, terrorism, etc., are all cost-push drivers and yes, they have been short-lived. However, this time, the Covid shock is simply not going away. And as long as part of the planet (starting with the U.S.) is still not vaccinated, more and more mutations could cause disruptions. Also, keep in mind, this cost-push inflation is counter-cyclical; here inflation (P) increases while output and jobs (Y) fall! This is the insidious kind of inflation that neither governments nor macro policy can address easily.

Can President Biden do anything? There’s no macro policy for this?

As I describe it, this kind of inflation is a “body blow.” Economies can address these supply-side shocks only by storing food, having petroleum reserves, semiconductor chips stockpiled, etc., and they can just try and wait it out. But with Covid, this has been an unduly long and ongoing “waiting period” of pain.

What is the other kind of inflation?

The “demand-pull” inflation is what we are all more familiar with, shown in the following diagram. Here the aggregate demand AD is deliberately “jump-started” or shifted to the right by pressing some combination of the three Keynesian policy “buttons”: (i) Increasing “good” or “productive” government spending (G), (ii) by the Fed’s lowering short-term interest rates (increasing the money supply) or (iii) by cutting taxes. This is the “benign” kind of inflation as here the inflation is procyclical; inflation (P) increases as does output and jobs (Y). 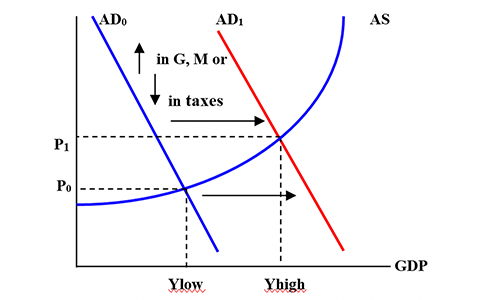 Is this type of inflation going on as well?

At this time, we have (i) a massive amount of monetary growth (M) that has been generated since 2008 and then increased astronomically during Covid. I have described this in other blogs [see my blog page] as Quantitative Easing, QE. Here the Fed buys distressed assets in any excuse to flood the economy with more monetary growth. It was $48 billion per month during the Subprime crisis from 2008 and then a staggering $160 billion a month during Covid. It is only now—from 1Q2022—that the Fed is contemplating a cut-back in QE by “tapering” monetary growth and slowing the injection of M into the economy to try and engineer a “soft-landing.”

The shift to the right in the AD can also be due to two other factors that are not policy “buttons” but are very important. They are C and I, namely consumer and investor confidence. So, add to the M, leads to, (ii) a surge in confidence. The pent-up consumer demand from Covid has exploded in a sadly mistaken and pre-mature belief that Covid is “behind us.” This combo of a surge in pent-up confidence and the overhang of huge M has pushed the AD to the right. Keep in mind that (iii) the “good G”, or President Biden’s huge 1.7 trillion Build Back Better program will shift the AD to the right and generate even more demand-pull inflation. However, this will come alive late in 2022 or early 2023.

So, there’s a one-two punch happening! Cost-push plus demand-pull! See both shifts in the diagram below. 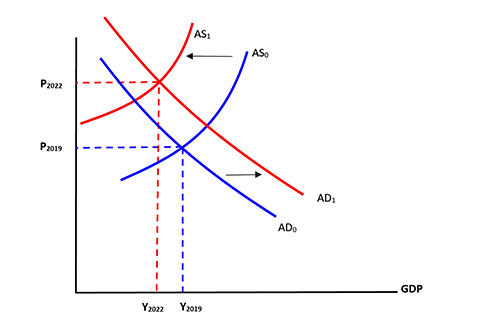 As they say in the commercials: “But Wait! There’s More!”

The Trump-Biden Tariffs. President Biden has simply continued the Trump trade war. Just recently (11/21) we saw new Biden tariffs on Canadian lumber. Tariffs (taxes on imports) raise prices, and this has been discussed extensively in other blogs. Keep in mind that prices are driven up not just on the imported tariff items but even their domestic counterparts!

That’s a lot. A veritable perfect storm of upcoming inflation.

Sadly, the “biggie” that will drive inflation has not yet been discussed!

Gulp. What is that? Not sure we want to know, professor!

Our Federal Budget Deficits. There was a time when the budget deficit/GDP ratio of 5% was deemed the upper limit. That was the largest budget deficit that we could safely sustain by borrowing (by issuing new Treasury debt) continuously and forever. Over 5% was found to be “non-sustainable.” Over this threshold, the fear of huge inflation and even hyperinflation would loom as the economy would have no option but to monetize the runaway deficits to “print money” crazily to fund the mammoth deficits.

But wait! We were around 10-12% in the Subprime crisis and almost at 15% during Covid. We are over 12% now (as of January 2022) and the sky has not fallen on our heads! Inflation was conspicuously absent during this period? Why?

Thanks to the Liquidity Trap. Very simply, and as described in much detail in earlier blogs, if the huge amount of monetization (printed money) does not rapidly rush out into the economy—if the money is not put into circulation—then the hyperinflation will be absent. If consumer and investor confidence is so low that the money—the “liquidity”—is not spent, but “trapped,” then the ensuing Liquidity Trap will produce a bizarre result in which huge monetization will not be accompanied by devastating hyperinflation.

This weird “perfect storm” was a circumstantial phenomenon, a freak snowstorm on a summer’s day.  But this was given a name: Modern Monetary Theory (MMT), and politicians like Alexandria Ocasio-Cortez and Bernie Sunders and others pushed for even larger spending to be funded by simply printing money. The argument was that since we’ve managed to get away with it since 2008 and especially during the massive spending of the Covid crisis, we could do so forever. There is nothing modern about MMT and it is not a theory.

We are still reeling from the fact that we’ve had so much money printed and no inflation!

Not exactly. To be sure, there was inflation, but it was asymmetric inflation in the SAP (speculative asset price) bubbles in asset classes such as SPACs, housing, stock market, cryptocurrencies, etc. It did not manifest itself in the CPI or the PCE indexes…until now.

So, if investor as well as consumer confidence were to surge again…?

Then that is when we see the real inflation. That is when the liquidity trap burns off; MMT vanishes as dew on a summer’s day, and this is when every Fed meeting will again be as anticipated as if it were a Royal Wedding. Which is how it was back in the days of Fed giants such as Chairmen Paul Volcker and Alan Greenspan. The only policy that will be able to combat the inflation will be massive monetary contraction—sharp interest rate hikes—to shut-down the liquidity. This is when the Fed will cease to be ignored again and this is when its MOJO will be back.

Is all this a forgone conclusion? Inevitable?

If there is an exogenous shock that trips-up this recovery then we will see a different ending, of course.  A new Covid strain, or Putin up to his old tricks again, or flashpoints in the South China Sea, or Eurozone issues, or drama with sections of our own country, or one of the many exogenous shocks on the planet that shut-down confidence, then we will see inflation dropping along with jobs and growth as the AD plunges to the left. But it is not all doom and gloom…. there may actually be another scenario that could dampen inflation….

The Hail Mary pass. Biden’s emphasis on pushing the U.S. to bring us the “next big thing” in innovation could increase the size of the pie…. but it must be something big. Look, as Peggie Noonan pointed out years ago in the Wall Street Journal, when U.S. automobile manufacturing was lost to the Japanese and then to the South Koreans, we invented SUVs. When we lost computer manufacturing, we invented the internet (Netscape browser). When we lost semiconductor chips to Taiwan, we invented high-end microprocessors…and on and on…. now it is time for the next big thing. If we pull this off, then we calm down inflation as this will cause the AS to shift to the right—this will increase the “size of the pie”.  And this will also increase growth and jobs. This will be the veritable Hail Mary pass: President Biden will need all his Irish luck and a four-leaf clover for this one.

So finally, you are delighted that the Fed will be taken seriously again, but are you worried about what is coming

Emphatically not. Being a student of history—and there is a huge amount of history in the Rutgers MBA program—the U.S. has been “written off” by much of the rest of the world, time and time again. From before General Washington crossed the Delaware on Christmas night, during the Great Depression, before the Union victory at Antietam, right after Pearl Harbor, right after the Battle of Kasserine Pass, after Vietnam, during Stagflation, after 9/11, after Covid, after January 6, 2021…. but this country bounces back every time, stronger than before.

Nope. I know my history. I am not worried.

Welcome to the Powerhouse.

The comments here are solely those of Prof. Langdana and should not be attributed to Rutgers University. Farrokh Langdana acknowledges valuable assistance for the plots from Prachi Joglekar, EMBA 2017.

Washington's crossing of the Delaware River, the night of December 25–26, 1776, during the American Revolutionary War (wood engraving). Getty Images.